Today’s concert whisks us away to sunny Spain, with music which comes from three ballets and an opera. Even though today’s composers are Spanish, Canadian, and French, they all wrote music for Spanish theatre pieces, which paint for us a vivid and colourful sound picture of that country.

from El Amor brujo (The Bewitched Love)  (about 4 minutes long)

This short and energetic piece is just a single scene in the rarely heard, full-length ballet El Amor brujo, and is often performed as an encore at orchestral concerts.

Unbelievably now, Manuel de Falla’s 1915 Madrid premiere of El amor brujo did not meet with success. Notwithstanding this failure, Falla is now considered the most distinguished Spanish composer of the early 20th century. His face even appeared on Spanish currency in the 1970s.

De Falla’s music embodies of Spanish music, largely thanks to the early influence of his mother. While the composer was growing up in Cádiz, in the southernmost part of Spain, Andalusia, his mother regaled him with the colourful folktales and the fiery songs of the Romani people of that region. These stories weave through the composer’s later ballets, operas, and incidental music.

In El amor brujo a Romani ghost story finds its expression in a Spanish ballet.

.When the Ritual Fire Dance scene of the ballet begins, Candela, an Andalusian Romani girl, is in love with Carmélo, but is being haunted by the ghost of her jealous husband.

It’s midnight. Candela, surrounded by friends and family, is dancing the Ritual Fire Dance around the campfire. They all join forces, in an attempt to draw the ghost out.

Candela and the ghost dance together, faster and faster, until the ghost is distracted by Candela’s charming friend Lucia. Candela and Carmélo kiss, breaking the spell and causing the ghost to be drawn into the fire, where he disappears.

Candela and Carmélo can be together, at last.

Elizabeth Raum (born 1945)
Flamenco Dance from The Passion of Carmen

When we hear the name Carmen, we now immediately think of Georges Bizet’s 1875 opera; however, by the time Bizet set it to music, the story of Carmen had already been around for 30 years. Carmen began life as an 1845 novella by the French author Prosper Mérimée.

Fast forward to 2007. Prolific Canadian composer, Elizabeth Raum, is commissioned by the Royal Winnipeg Ballet, to write the score for a brand new, full-length ballet. Argentinian choreographer, Mauricio Wainrot, has reworked the Carmen story for this ballet. The Passion of Carmen premiered in Winnipeg later that year, then went on tour across Canada, including performances in Regina and Ottawa.

What we’re hearing today is Raum’s orchestral suite, Flamenco Dance. Flamenco is a traditional Romani dance of profound emotion, which we can hear in the expressive melodies and everchanging rubato rhythms.

The Regina Symphony Orchestra, where Elizabeth Raum had previously played principle oboe, premiered this piece in 2009. Raum weaves together music from two scenes of her ballet score, which was written for a smaller orchestra, expanding the score to use the RSO’s larger orchestra to full advantage.

The first part is a scene where Escamillo (a matador at the bullfights) is trying to impress Carmen (a Romani woman working in a cigarette factory), by dancing for her.

You’ll hear the clicking of castanets, which are pairs of shell-shaped wooden percussion instruments. Flamenco dancers often hold a pair of castanets in each hand, and click them, to accompany their own dancing. The tambourine takes over for the castanets and is then replaced by the increasingly complex rhythmic clapping of the bystanders, who are watching Escamillo as he dances. This scene ends with Carmen rejecting Escamillo.

In the second part of the suite, the tambourine returns: Carmen has changed her mind about the matador, and dances with him, passionately.

Manuel de Falla
Suite No. 2 from The Three-cornered Hat

It was because of this piece of music that the artist Pablo Picasso drew on Manuel de Falla’s head.

And a victory it certainly was. This was the piece that the made the 32-year-old composer internationally famous. It also introduced audiences worldwide to the music of Spain.

The 1919 London premiere of de Falla’s new ballet, The Three-cornered Hat, had been an enormous success. At the post premiere party, Picasso took the hostesses’ eyebrow pencil and drew a laurel wreath around de Falla’s bald head, to crown the composer for his victory.

Picasso was in London at all for the express purpose of desiging the sets and costumes for this ballet,  and he even painted a gorgeous bullfighting scene on the stage curtain.

Just what is a three-cornered hat? You might remember a battered one being worn by Captain Jack Sparrow, in the Pirates of the Caribbean movies.

In the ballet, the lecherous local Magistrate’s three-cornered hat symbolizes his important position in the town. This corrupt official attempts (unsuccessfully) to misuse his power to entrap the faithful Wife of an honest Miller. All three—the corrupt and lecherous Magistrate, the faithful Wife, and the honest Miller-—are recurring characters in Spanish storytelling.

Two years earlier, de Falla had turned Pedro Antonio de Alarcón’s 1874 comic novella into a short pantomime. It was this show’s 1917 performance that caught the eye of the important impresario Sergei Diaghilev. He convinced de Falla to expand it into the full-length ballet, which became an international hit for Diaghilev’s touring Russian Ballet.

Today, we hear the second of two orchestral suites, which de Falla created from the ballet’s music.

Part 1 is The Neighbours’ Dance, as the villagers gather to celebrate St. John’s Eve. They and the Wife perform a Seguidilla, a folk dance with a guitar introduction. We can hear the orchestra mimicking the rhythmic strumming of the guitar. (We’ll hear a Seguidilla later, in Carmen, too.)

Part 2’s Miller’s Dance is a Farruca, a form of Flamenco traditionally danced by men. Here, it’s an

athletic portrayal of both ferocious bull and intense bullfighter. Listen to how this part keeps building in intensity, getting louder and speeding up in waves.

And that gradually building excitement leads right into Part 3’s Final Dance, which is an energetic Jota, complete with its traditional castanets. The townsfolk celebrate their victory over the powerful Magistrate, by joyfully and repeatedly tossing him up into the air, on a blanket. As the Suite ends, listen for the musical depiction of the indignant Magistrate’s rise and fall.

You may think that you don’t know any tunes from the opera Carmen, but you definitely do.

At a young age, the French composer, Georges Bizet, was recognised as a musical prodigy, by his musical family, and went on to write many works, including 30 operas, although most are incomplete. Today, we hear parts of the two orchestral suites which Bizet’s friend, Ernest Guiraud, created from music in the melody rich Carmen.

Chanson du Toréador – This depicts the heroic life of a famous bullfighter, as told by the bullfighter. Cymbals crash and the orchestra exudes confidence as the higher instruments jauntily show off and the lower instruments strut back and forth, keeping a steady pace.

Prelude and Aragonaise – The tremolo in the strings, as well as the ponderous and slowly rising melody, builds the dramatic tension of the short Prelude. When you know that this is the Fate Motif, you realise that it’s hinting at the tragedy to come. The Aragonaise opens with immediate staccato trumpets in a snappy fanfare with clicking castanets.

Habañera – The first of three arias sung by mezzosoprano Julie Nesrallah as Carmen, who sings for the men watching the cigarette girls leave the factory. Only Don José is disinterested, so she throws him a flower. The cellos play a four-note tango rhythm more than 100 times.

Marche des Contrebandiers – The Smugglers’ March opens with a quiet solo flute sounding downright sneaky, who is then joined gradually by more and more instruments, who all seem to gain in confidence.

Intermezzo – Opening with only harp and flute, this is a gentle, pastoral moment, despite the approaching tragedy in the story.

Séguidille – We heard the same type of dance in The Three-cornered Hat. Imprisoned, Carmen sings about dancing when she’s free, to seduce her jailor, Don José, and escape. As is typical of this dance, the music in triple time and starts on the offbeat. The orchestra imitates a strumming guitar.

Les Dragons d’Alcala – This opens with military style snare drum and bassoons, leading in dragoons (members of a cavalry regiment), in a military march.

La Garde Montante – In the opera, this is sung by a children’s chorus, singing about imitating soldiers. Here, it opens with a bugle call, joined by flute and piccolo, in a childish version of a march.

Danse Bohème – Carmen sings of tambourines and frenzied guitars, at first indecisive and timid, then livelier and faster. The orchestra, once again, imitates a guitar and gradually grows louder and faster, gaining momentum and energy.

Opening night of Carmen was delayed because the producers feared that the controversial themes, exotic Spanish setting, and blatant realism would offend audiences. And Carmen’s immoral behaviour and eventual murder did prove to be too much for many audience members and commentators. Adding to the challenges for contemporary audiences and revieweres were the opera’s chorus of cigarette-factory girls smoking and fighting onstage (which the performers resented having to do), and a difficult score that the complained was unplayable.

Although two other prominent composers, Camille Saint-Saëns and Jules Massenet, attended and adored this opera’s 1875 premiere, the Paris newspaper reviewers disliked it. As did Charles Gounod, Bizet’s old teacher, and France’s preeminent composer of operas, who even accused the younger composer of plagiarism.

What turned out to be Bizet’s final and most scandalous opera went on to become one of the most successful and well-loved of operas. Sadly, he died just three months after the premiere, still believing that Carmen was a failure. I’m sure that you’ll leave today’s concert humming one of the many memorable tunes from what is now considered to be Bizet’s masterpiece.

Trevor Rines is a writer, musician, graphic and boardgame designer, and stage and voice actor, who has performed in every one of Shakespeare’s plays & has acted as narrator for three Orchestra Toronto concerts.

He performs with the notorious Renaissance gemshorn quartet, The Gemsmen, & was recently a contestant on Evil Idol. 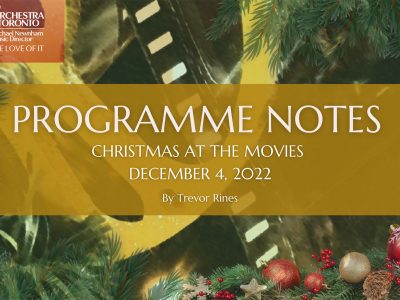 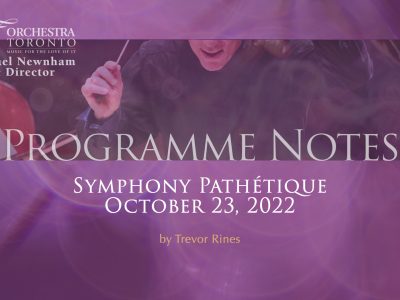